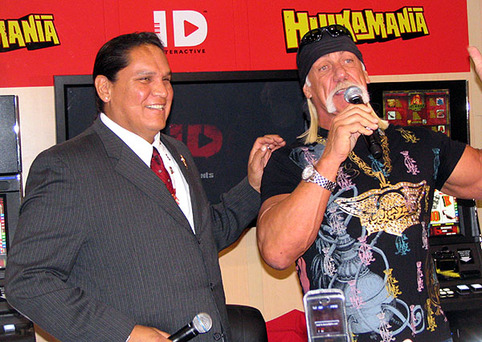 Dreamseekers and the Spirit of Sovereignty Foundation recognize students that are exceptionally talented and demonstrate skills that positively represent the Native American community. Recipients are qualified based on criteria such as, but not limited to: Course study, GPA, and Enrollment. The selection process for scholarship is competitive, and the award is distinct and prestigious.

Working with the Spirit of Sovereignty Foundation at the National Indian Gaming Association (NIGA), Hulk and Dreamseekers have committed to building the non-profit organization in partnership with Indian Country to provide needed assistance to Native America youth and their families.

Hulk Hogan participats in the foundation’s activities by providing a familiar public face and forwarding the organization’s goal: providing greater opportunities for youth in Indian Country. Hulk Hogan has made it a priority to start this program in areas of Indian Country with the most need.

The Dreamseekers Foundation hopes to provide a significant amount per annum to tribal nations that face adversities such as poverty, violence and lack of various resources.  “We’re specifically focusing on efforts to improve healthcare and education for Native youth and their families around the country, as well as give them access to as many other critical opportunities as possible,” said Ernie Stevens Jr., co-founder of the foundation.

“American Indian children are more likely to live in poverty than any other racial or ethnic group in this country“, Hogan noted, citing recent U.S. Census Bureau data.  “It’s time to change that, and I’m proud to be associated with that effort,” said Hulk Hogan.